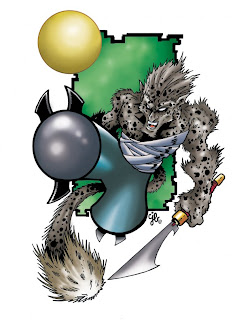 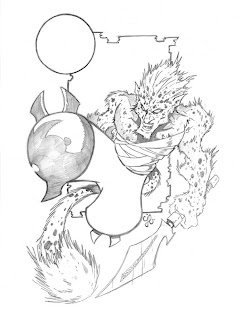 
So I now have this dilemma. I am currently making a "Art of" book to sell at the New York Comic Con on October 8th-October 11th, and I was just about ready to print when I decided that I wasn't sure about the cover to the book. The cover I was about to go to print with was the Neon Spider-Man pin-up I just did recently. I laid out the image with the text I wanted, and I was REALLY happy with how it looks. The title of the book is called '2010- Twenty-Ten', the 'Art of Corey Breen'. Everything was all set with the cover and the interiors showcasing my favorite pieces from 2009 and 2010, with some other favorites thrown in there as well. At the last minute, I thought about it more, and decided to try and do a alternate cover to the book featuring one of my own creator owned characters. I was just going to attempt to do something cool, but since I loved the Spider-Man piece as the cover, knew it really wouldn't trump that to be considered for the cover.

Then I actually drew this really kick a$ drawing of my main creator owned character named SaricH, that I'm sure you all have seen before. He is like my company mascot you could say, but also a character that I plan to do a Cerebus type of book on someday soon. Because the piece came out so good, I went right into digital inks on it, and then fully colored it, using my process I have been showing off to you these past two weeks. I now have this process down so well, that it's really helping me crank out some really nice pieces. So now I have this image that I really love now, that I am caught in a dilemma of deciding whether I want to keep Spider-Man as the cover to my Art Book, or replace it with my creator owned character, SaricH, above.
There is pros and cons to each one. I have heard around the industry that selling sketchbooks at conventions or on the web, or even to feature them on your website, it is ok to use. You can draw Spider-Man even though it is copyrighted, if you just make sure to include the copyright info. But is kind of frowned upon to use a copyrighted character that is not your own for the cover. They say companies give you a free pass when using their characters in sketchbooks, as long as you don't use them on the cover. That's what they say...

If I wanted to use the Spider-Man piece, it is not my character, so it may be considered a little bit of risk. That may give me more notice, and people would be more likely to buy something with Spider-Man on the cover then say one of my own characters, but I also feel that having one of my characters featured on the cover is more a representation of what I want. I want my character to be showcased at the con, and I having him on my Art of Book would do just that. I will be featuring, and selling a statue of SaricH at the con as well, that you can see if you stop by my table at the con. The statue was made by my ex-coworker and friend and amazing sculptor, Amos Hemsley. You all have seen it if you read my blo, but if you haven't do a search for it, and check it OUT! NOW! I'll wait! Good? Good.

So I leave it up to my fans. What do you think I should do? I love both images and I want to use both images. I rather not make a 50-50 split on the covers, because I'm not sure how much that would cost. I will look into that. BUT, in the meantime, post a comment on here, or my Facebook page of CjB Productions Facebook page, or on Twitter, and let me know what you think I should do. I'm leaning towards SaricH, but I want to get your opinion's as fans of my work, and see which one you and other fans at the convention will buy.

Below I have images of how both covers would look with the cover text and everything! 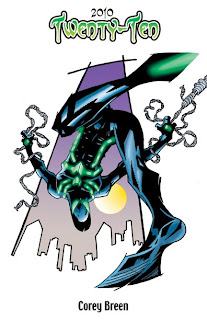 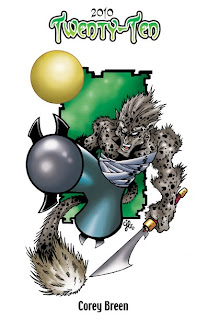 cover A for sure, it's a much more dynamic pose, I think it will pull people into your book better.

Seconded. The Spidey cover really draws me in. The pose combined with the graphic nature of the background is a good mix.