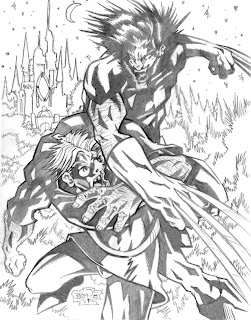 Wow, has it been that long. I am so, so sorry. The end of the summer got really, really hectic for me, what with getting married and all. I thought I would have a lot more to post and talk about, but time really just flew by. I have a list of things I want to draw and have started, but because of personal issues, couldn't get around to any of it until now. I finally have just a little free time to catch up on things.

The first of which is my Marvel vs. Disney Pin-Up. I know this is old news, and I'm probably the last to contribute, but how could I not. I'm sure no one has thought to do anything with The Hunchback of Notre Dame, but since it is one of my favorite Disney flicks, I thought that would be a very original idea to draw, since everyone and they're mother has come up with all the different combination's to this merger.

I myself am very, very excited about the possibilities here, and really hope that they get some crossovers done here, in movies and comics. Some of my ideas, getting some great creators on some books, are the following:

Hope you like some of those ideas. Big thanks to Tom & Dezi on some of their suggestions! I think some of these books would be MAD cool! Let me know what you all think, would lOVE to hear some of your ideas.

Other then that, I am trying to finish up a Pin-Up of Zartan that I am drawing right now. Then I hope to FINALLY have the GREEN LANTERN SPREAD to show! It has been FULLY inked by the great Mike Sellers and is currently being colored by one of the BEST colorist in the industry! Just WAIT until you see it!

Until then, I remain,