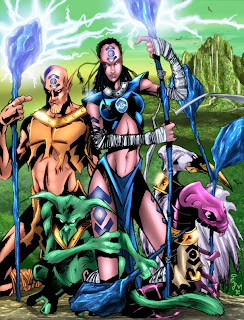 Indigo Tribe - Green Lantern © DC Comics
Colors by Jason Embury
Art by Corey Breen
Photoshop
When I joined Twitter, I never thought it would click with me like it has. The vast community that it is, has really expanded every aspect of career and my life in general. Since joining, I have grown my fan base ten-fold, gained so many new friends in and out of comics, and my creative juices had been flowing non-stop! Being a part of a online community where you can talk shop and share endlessly with some of your biggest influences and heroes, has driven me to work harder then I ever have before. I can't even imagine life without this amazing technology.

I think from being a Production Artist all these years, I have a real respect and admiration for colorists, and them for me. I understand what kind of stress and deadlines they are under, with little to no recognition to show for it after it's all done. These guys and gals work their butts off on these comics, and sometimes more so then the actual penciller and inker, are called on to turn pages around, literally overnight. I think because I've worked with so many colorists and how I dabble with coloring myself, I as able to connect with one in particular because of Twitter and Facebook. One of the amazing new friendships I've gained has been with Jason Embury.

Jason and I started talking shop almost as soon as I joined Twitter, and we've become great friends through it. We shoot ideas and advice and stories, and links back and forth all the time. Although we've never met, I'm sure that will change soon, too. Jason is a hard working colorist on the rise to superstar-dome, in my eyes! He has already become a real inspiration to me, and not just his incredible work ethic, but his skill as well. He strives to be better all the time, and is open to advice and ideas all the time. I think he is the epitome of why I get along with most colorists the best. As an artist, it's very hard sometimes to get along with other artists because of that competitive nature we all have. But colorists are a different breed of artists and they tend to be more friendlier and open to experiencing so much more then your average artist.

Since becoming friends with Jason, he has shown a great interest in my art, and I his. For some reason, he likes my work, and I think he is going to be the next big name in the field, just you watch! You heard it here first. Because of this, I've had the pleasure of him wanting to color some of my pieces for me! I sent him some art he thought would be really cool to color, and above is one of the first ones he did for me.

I think it is really AWESOME! He did an amazing job with it. This was really just a quick drawing I did back when Blackest Night started, but Jason digitally inked it, and colored the HELL out of it. I can't thank him enough for this, and can't tell him how cool I think he made it (especially with the rendering on the staffs and the landscape/ background). I LOVE when other people color my work, it makes me feel like a million bucks, and I am honored that Jason did this! I hope he remembers me when he gets all rich and famous!

I hope you like it, and if you want to see more of Jason Embury's AWESOME colors and what books he is coloring right NOW, please check out his website at:

I'll be back later in the week with more goodies to share! 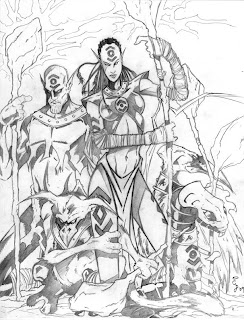 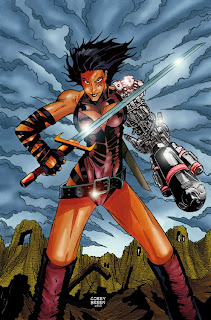 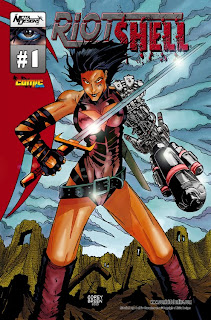 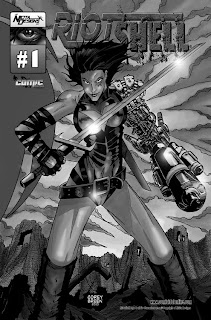 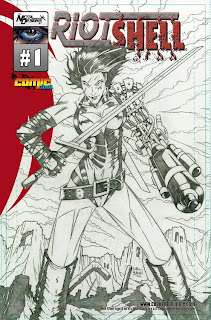 The above covers are for Comic Idol Online's contest to create the cover to issue #1. The winner gets his/ her artwork on the actual cover to the first issue. The contest has been going on all month, and I decided to throw my hat in the ring and enter. This was a really fun piece to do, actually. I didn't ink it at all, just played around with levels and digitally inked it, touched it up, and finally colored it all up in Photoshop. I payed around big time with filters, especially the mechanical arm, and finally settled on the chrome like filter, "bas relief".

This was a really great idea by Nicita Designs and if you go check them out on their Blog and Facebook page, you will see a lot of really great entries. Below is the contest entry form, Riot Shell #0 cover used as reference, and the entry text. 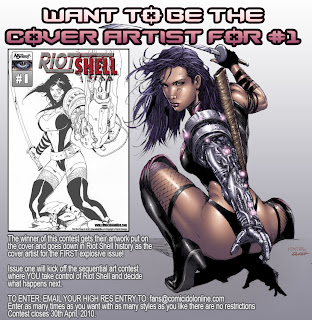 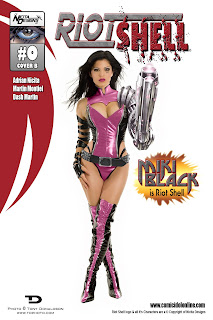 Riot Shell is an all NEW online comic series, created and inspired by Adrian Nicita (from Nicita Design). Riot Shell revolves around a woman who can transform her arm into any kind of weapon she desires. Nicita Designs and Comic Idol have put together a 7 page preview (#0) as a jump on point and the best part is...the rest is up to... FANS!

The next phase will begin with an online contest (starting May) where anyone can take part by simply submitting their completed comic page to continue the story. Contestants will be given a certain time span to create and upload their page and then the voting begins, which allows the story to progress via the choice of the readers themselves!

After the revealing of the winner of the pin up Contest winner (whose art will be featured in #0) it was announced that a new contest was set into plan. The new prize was to be featured as the cover artist to Riot Shell #1.

After an overwhelming response however, after the start of the contest in the beginning of March, Adrian decided to Upgrade The Contest.

The winner of this contest still gets their artwork put on the cover and goes down in Riot Shell history as the cover artist for the FIRST explosive issue!
However, the FIVE Runner ups will see their artwork featured as Chapter Art for each 6-page chapter!

Download the high resolution logos to give your cover the look and feel the official product: http://www.nicitadesigns.com/CIO/fankit.zip

TO ENTER, EMAIL YOUR HIGH RES ENTRY TO: fans@comicidolonline.com

Blu in the Face! 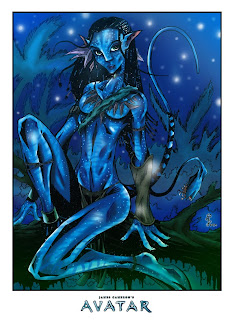 After watching Avatar on Blu-Ray for the first time (fourth time seeing the movie overall), I knew I needed to spruce up my latest Neytiri pin-up! With the help of my friend, and colorist extraordinaire, Jason Embury (http://www.jasonembury.net/), I threw in a ton of filters and special effects to the piece. Jason threw me some advice and ideas to really make the piece pop, and as you can see, the effects add so much to it.

Thanks for that Jason, and I hope you all like the finished piece now. Sometimes I forget that just coloring something is not the end of it. You really have to go in there and throw in some really dramatic lighting, and mood, and SFX to make it even cooler!

New material to be posted on Monday, so stay tuned (and no it's not another Neytiri piece- I'll save the new one I'm working on for sometime in the future, lol)!

Gonna Watch Avatar on Blu-Ray til I'm BLUE in the Face! 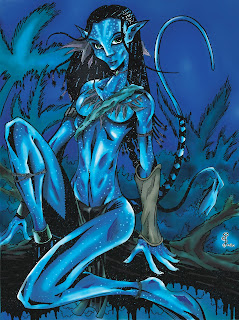 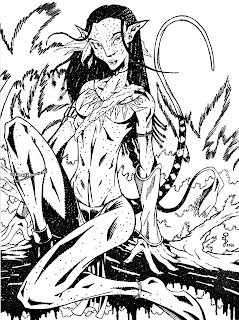 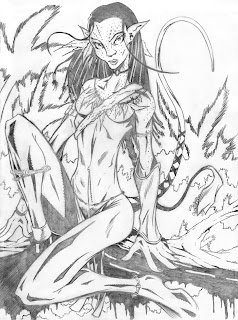 So guess whats out on DVD/ Blue-Ray?! Unless you live in a cave, you know it's Avatar, right? Now I know it's just the regular no-frills edition (the 3D Special Edition comes out in November, even though NO one has a 3D TV yet or ever), but I don't care, I ran to the store to pick it up. I started this piece soon after I saw J Scott Campbell's piece of Neytiri that he was doing on his UStream, and included in his Con Sketchbook from C2E2, and got inspired! I think this is my BEST interpretation of Neytiri so far, or any of my Avatar drawings. I think I got the likeness down better of the gorgeous Zoe Saldana. Let me tell you, likeness are HARD, and it takes about 3-4 drawings to even START to get it looking like you want it to look. And I'm still trying. But here is my latest Avatar Neytiri drawing (my 4th if you can believe, and I'm sure you can).
Hope you like it. I drew it in pencil first, then inked it, and did some white out splatter effects. Then I colored it all up in Photoshop, and also gave it a Canvas filter to kind of make it look all uniformed.

I Was supposed to post it last night, but didn't finish it until late. There's still some things I would even tweek on this piece, but I figured it was time to wrap it up. REALLY enjoyed doing this piece though, and already I want to do another one. This movie and world and characters has inspired me like no other, and maybe not since Lord of the Rings have I been this creativitly influenced. So knock me all you want for loving Avatar but it's kinda become more then just a movie and video game to me, but a HUGE influence in everything I will do for a long long time... until the sequel!Talk to everyone soon (really soon- like Monday). I have at LEAST two to three post to do immediately next week that I am really proud of and can finally show. And that will be nice after what it seems like forever I haven't had stuff to post, even though I've been workin' my bum off!

Avatar Pizza Party Tonight at my place, 8pm on Blue-Ray!

PS- Below are some AMAZING Avatar pin-up's that are AWESOME! 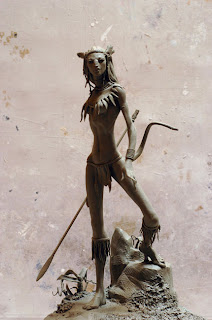 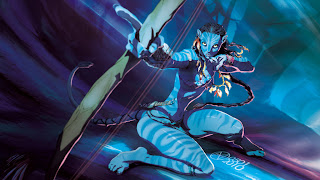 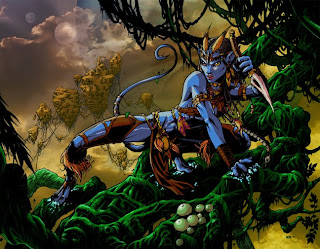 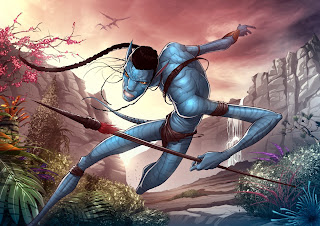 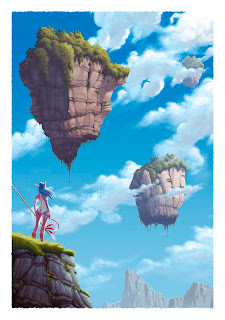 Unknown Artist (don't even know if this is an Avatar Pic) 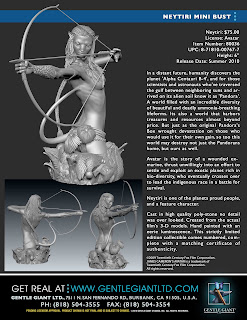 Posted by Unknown at 8:40 AM No comments:

The Artist Formally Known As... 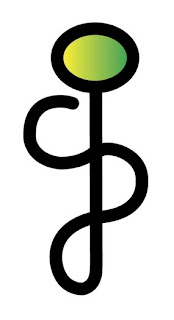 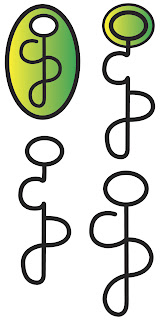 Just wanted to share with you my NEW logo, although I will not be scrapping my old one. This will just be an alternate logo I'll use more for drawings and signage. Still very fond of my real logo, and that will remain the face of my DBA, but also wanted something like this, that could work as a logo/ signature. I'm really happy with it, and you may have already started seeing it on some of my drawings.

Let me know what you think!

PS- Sorry it's been a while since my last post, but they should be coming more often now that the VERY busy month of April is now behind us. I do have like 4-5 pieces I just can't show you yet because I have not gotten permission yet from their clients. Hopefully soon I will be able to show all the stuff I've done, so it doesn't look like I haven't been working at all. Quiet the opposite actually... stay tuned!
Posted by Unknown at 8:47 AM 1 comment: