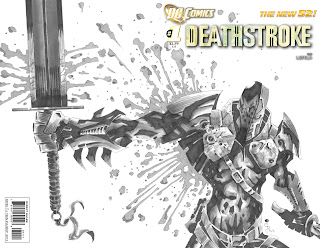 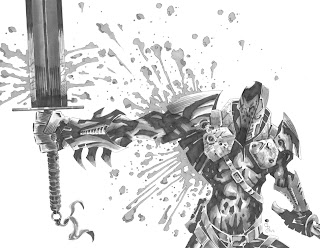 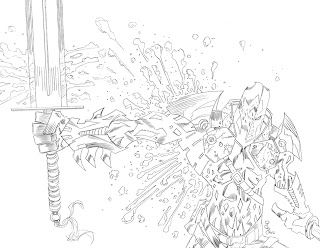 I really LOVE Deathstroke as a character ever since I saw those beautiful Mike Zeck covers back in the 90's.  Something very Snake-Eyes and Batman about him, but just a cold blooded assassin instead.  I also really just like comic book characters who have some kind of disability.  Batman has no super powers, Snake-Eyes is speech-less, Aquaman had no hand (for awhile), Daredevil and Deathstroke have blindness.  Just great characters.

If anything, Deathstroke is just an awesomely designed character, and I had a great time with this design too.  I HIGHLY recommend the first TPB from the New 52 Deathstroke, Pre-Liefeld.  It was a balls-to-the-wall shoot 'em up and I really, REALLY wish we kept that creative team.  I really wish it caught on with readers, but alas, it didn't.  Pick up the trade though and you'll see that you and everyone missed out on an AWESOME book that was was really fun, really dark and twisted, and above all else, fantastically drawn.

Hope you dig this cover too.  Next up is cover #22 of "52 by 1", Voodoo!  Another New 52 book that unfairly got the shaft when it was actually a really cool book.  Another book that was just all out action and adventure.  Guess that is just NOT appreciated these days.  I guess comic fans really do just want talking heads.  To me, that is just boring.  A couple of books with all talking heads is ok, that's fine, but give me books like Deathstroke and Voodoo any day.  Too bad.

It's like AMC's The Killing show.  They always cancel the BEST books and shows, yet keep the crap.  Can't believe Real House Wives of Jersey is still going yet they cancel a show like The Killing.  Makes me so mad!  I just don't get it.  Yet, The Killing was a talking heads show, so go figure, I guess I have no idea what I'm talking about, hah ha. 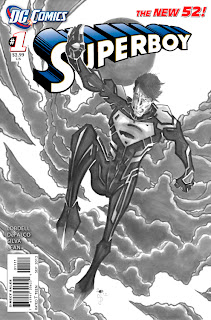 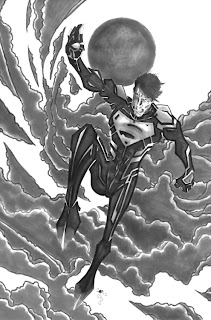 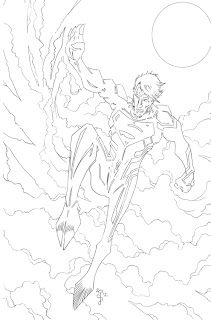 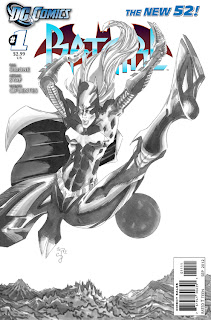 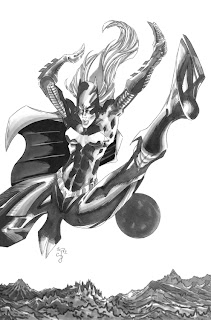 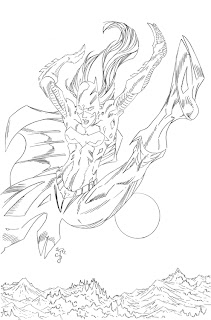 This is the 19th 52 by 1 piece this year.  Yes, I'm way behind.  Trying to catch up.  Superboy and Deathstroke next.  Then Voodoo, OMAC, and Demon Knights right after that. 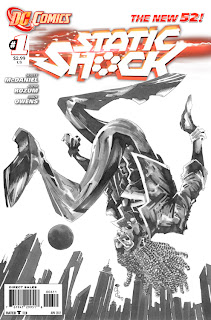 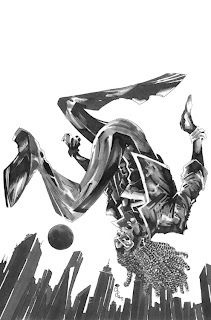 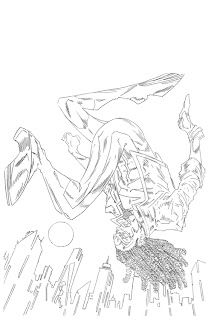 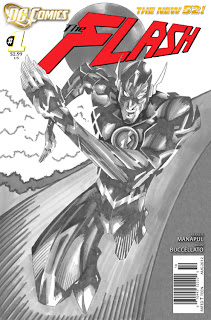 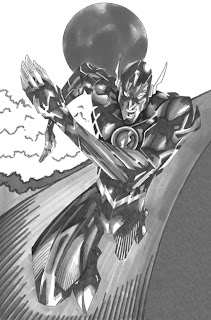 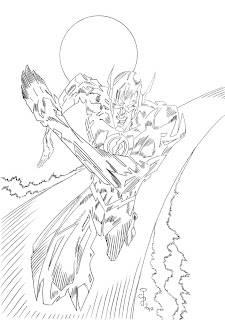 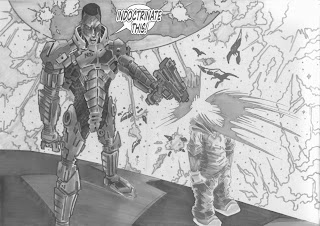 I guess this is as good a time as any to post my Mass Effect 3 drawing.  I have actually been done with this piece since I finished the game back in April, I think.  But I never got around to posting it because, honestly I was dreading writing about the game.  I just KNEW it would be a HUGE posting.  But I think it's finally time.  Especially since they just came out with the amended endings.

I was one of those people who was satisfied with the ending (I am a big fan of philosophical aspects of Science-Fiction, so when ME3 went that route with their ending, I thought it was cool).  I was also ok with Sheppard sacrificing himself.  I wanted him to do that since ME1.  I like when the hero has to die to save everyone else.  I liked the choice I made at the end of the game, but little did I know that I barely understood it at the time.  I choose to SYNTHESIZE.  My thinking was that, the whole series, I learned that it didn't matter if you were human, alien or robot, we all had to fight as ONE civilization to overcome the Reapers.  I figured, that was really the point of the entire experience.  That we are all a mix of flesh and cybernetics.  So it was only logical to try and save the universe by mending the two.  I died and then saw my whole team live on as new spices of synthetic beings.  Creepy, but that was my decision.

I went online after I finished the game mostly because I had heard rumblings that everyone was tearing the endings apart and wanted to see why.  I read some things, and was like, "oh, wow, people are upset."  And after reading all the complaints, started to realize why.  I wont go through all the reasons they said it sucked, but some were very valid.  I started to get upset a little myself.  Like they left out so much information.  The game should not have been over.  There were just too many questions, and way too many holes.  In all three endings, the game seemed to ignore the main premise of the game, and that is that it was UNIQUE to each player.  That MY game was different then YOUR game which was different then ANY other game.  My Shepard was mine.  But these endings took that away from us and made EVERYONE'S Shepard the same.

I keep reading and reading, now hooked on whether or not the ending was "good" or not.  But then I came across... THE INDOCTRINATION THEORY.  THis BRILLIANT theory, created by genius fans online, described a theory to the ending of Mass Effect that if true, would have created the greatest ending to a video game in the history of games.  It was based around the idea that Shepard (YOU) were brainwashed.  And you had to BREAK the brainwashing.  If you chose to "DESTROY" the Citadel, then you broke the brainwashing and it lead you to the ONLY ending where Shepard is seen again at the end, taking what seems like a breadth.  Let;s just say the theory was brilliant.  See it here for yourself!

How amazing was THAT?!  I was convinced.  EXCEPT for ONE thing!  I believe in the theory with ONE HUGE EXCEPTION.  I don't think it's all in Shepard's head, like it says.  I think he was let free to go into the beam and reach the citadel control room.  That's where Anderson AND the Illusive man were brought too.  I think that is REALLY happening.  Yet Shepard is now fighting the Illusive Man AND the reaper indoctrination in his OWN mind.  I think all that plays out with the Illusive Man, and Shepard is ALSO brought up to top, to make his decisions.  The only thing in his head is the fact that he is trying to fight off indoctrination.  It's up to the player to make the correct choice, which turns out to be DESTROY.

Well, time has now passed, and now the DLC is out for the REVISED endings from Bioware.  They expand on the endings, include a fourth option (which is everyone dies, lol), and they also fix some glaring inconsistencies, and mistakes such as the Relays exploding (which can't happen, or that solar system would perish).

Below are the revised endings to each choice.

Bioware did right by extending the endings and making it clears as to what happens when each choice is made by the gamer, even though it may be too little too late.  No one may care anymore.  I appreciate it though.  What I think kinda sucks is... it makes the indoctrination theory just that, a theory.  It's not the true ending.  Bioware could have just said, you know what, yeah, it's the Indoctrination Theory, the fans are right.  They were the smart ones.  All the other gamers, we GOT you!  We indoctrinated YOU!  JUst like your Shepard, we were able to indoctrinate millions of gamers (me included, I chose to Synthesis, which is WRONG!)  It was wrong for me to play God.  I had no right to change the DNA of thousands of beings.  I had no right.  That was NOT my mission.  The ONYL correct choice was to BREAK free from the indoctrination, to not BELIEVE any of the LIES that the ghost boy was talking about, refuse the Reaper voice in your head, block it out, and choose to DESTROY the catalysts.

What could have been the most brilliant ending, in my mind still is though.  I will always fight to say that that is the REAL Mass Effect Ending!  I enjoyed every SECOND paying the Mass Effect series, and even though the ending had some bumps and bruises (what ending DOESN'T these days), overall, Mass Effect will be remembered as an al time FAVORITE!

I can't WAIT for the Mass Effect 4!

Oh, hope you like the drawing, by-the-way, lol.  More of my "humorous" side coming out (if you can call it that).  Because who DOSEN'T want to just FRAKKIN' SHOOT THAT KID THOUGH, REALLY, once you get up to the top of the Citadel, hah ha.  I just wanted to poke fun at the fans reaction to the ghost-boy-in-the-machine ending.

Time to move ON!  Maybe I'll just go look at the Art of Mass Effect books I have and get inspired some more, that sounds like an AMAZING idea to me! 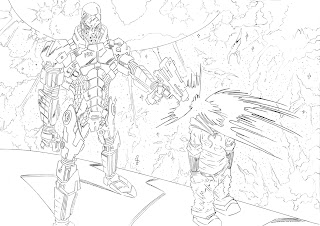 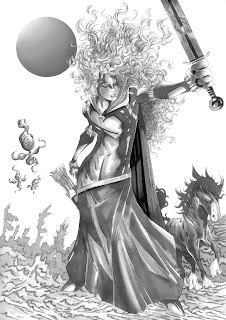 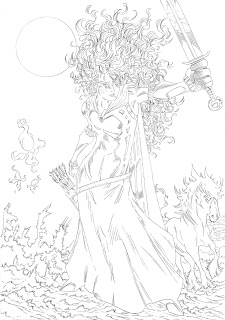 Instead of me writing a lengthy review of Brave, I thought I'd skip all that (cause really, who cares what I thought about it), and just leave you with my drawing of the awesome Merida, and the wonderful song from the film by the amazing Mumford & Sons & Birdy!

PS- I liked the movie a lot, everyone needs to go see it if they haven't yet!

We will run and scream
You will dance with me
We’ll fulfill our dreams, and we’ll be free

We will run and scream
You will dance with me
We’ll fulfill our dreams, and we’ll be free
We will be who we are
And they’ll heal our scars
Sadness will be far away

So I have done wrong
to put me right
my judgement burned in the black of night
Then I give less than I take
It is my fault, my own mistake

We will run and scream
You will dance with me
We’ll fulfill our dreams, and we’ll be free
We will be who we are
And they’ll heal our scars
Sadness will be far away

Posted by Unknown at 9:23 AM No comments: