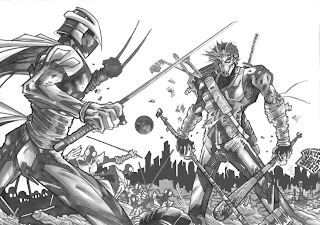 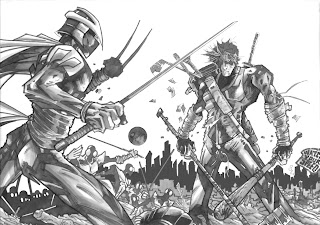 The assignment was to draw any character/s from The Teenage Mutant Ninja Turtle franchise, just NOT any of the Turtles themselves.  So I choose one of my favorite characters from TMNT, Casey Jones!  Big surprise there huh?  I did two versions, one with his mask on, one with out.

Really want to see the outcome of this fight now, lol

Hope you dig it!

Posted by Unknown at 8:46 AM No comments: 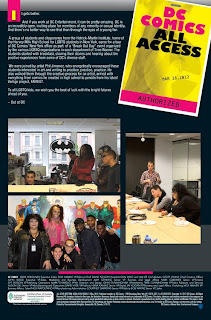 DC Comics All Access Page © DC Entertainment
If you blink, you'll miss it!
If you bought any DC Comic books last week, and you read the final page in each of them, you would have read DC Comic's All Access page. This week's feature was about a group of students coming in for a tour of the offices, which included a stop by the BEST part of the tour, the Pre-Press Bullpen!
The students who came in for the tour were from the Harvey Milk High School, and they stopped by the bullpen for a visit. I gave a demonstration for the tour, as well as some inspirational words, as I usually do for all tours that come in, especially students.
That's ME in the picture with the Bat symbol in the back window, in the new Pre-Press renovated office.
Usually I'm a behind the scenes guy, but for one week only, you get to see me hard at work!
Laugh it up, FUZBALL!
CjB
Posted by Unknown at 9:25 AM No comments: 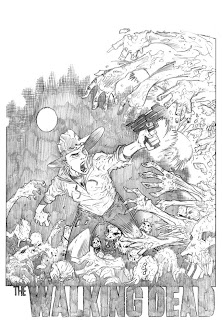 Carl from the Walking Dead
© Robert Kirkman, Tony Moore & Charlie Adlard
By Corey Breen
Pencil
What an amazing comic book series, and now an amazing TV show The Walking Dead is. I was finally able to catch up on the show last week, and I am now in mourning there are no more new episodes!
When the next Sketch Attack assignment came about and the topic was Zombies, I jumped at the chance to draw this image from The Walking Dead. IT has been floating in my head since I been watching the show, mainly because I read the comic and know a little bit how they may or may not play out some characters. I just think of poor little Carl...
So I drew Carl as a bad-a$$, shooting off a zombie hoard. Has not happened on the show, obviously, but it's been in my head because you can see Carl quickly losing his humanity and becoming a person who is gonna have to shut off his emotions and just kill some zombies soon like he has in the comic. If you don't read the comic and just watch the show, what the HELL is WRONG with you?! LOL
Hope you like the piece, though, and be sure to check out all the other Sketch Attack artist's Zombie interpretations at
http://sketchattack.tumblr.com/
OTHER NEWS
I have the next two "52 by 1" pieces to finish, but still haven't gotten more markers, so I'm gonna be behind schedule a little bit on the project. But they will be posted as SOON as I get my markers, throw on some tones, and finish them off. I hope in the meantime I can sketch out the next 10 or so covers to stay on schedule after that!
I also have to complete a previous Sketch Attack drawing assignment I missed that I look forward to drawing, and that is of Lobo.
So as usual, stay tuned, more to come!
Thanks for visiting!
Corey Breen
Posted by Unknown at 8:48 AM No comments: