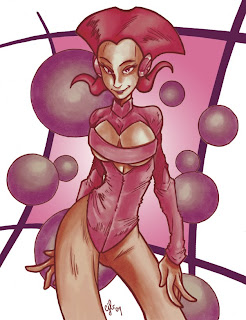 So I got a new toy at work. A Wacom Cintiq! Still getting used to it, but so far, I really, REALLY like it. It' just yet another tool to work with, and it takes some getting used to, but the precision is pretty close to drawing with a pencil. I was able to zoom in real close and redraw a lot of the lines on this piece with the tablet, that I would have had a lot more trouble doing with a regular Wacom Tablet. I hope to keep using this tablet and try and save up for my own one day (if I ever hit the lottery), so I hope to get a lot better. I REALLY want to try Manga Studio Pro, but don't know if work would let me order it here, even though I would totally pay the $30-$40 for it myself.

The piece above and below is a character from the AWESOME book from Soleil Productions, called Sky Doll, and it is one of my favorite books, especially now that Marvel Comics is translating it from French! Please check it out if you haven't already, and there are links to the artists' blogs below (Alessandro Barbucci & Barbara Canepa)!

Oh, also be sure to check out, no, BUY the Wonder Woman Animated Movie! I can't tell you how AWESOME this movie is, and it proves that, one, you can make an amazing animated movie once again, if you have a really good story to tell, and two, that Wonder Woman IS a great character and can be done really well.

So be sure to check out Sky Doll, and Wonder Woman Movie, and save up that money for a Wacom Cintiq (http://www.wacom.com/cintiq/cintiq-12wx.php)! I gotta get back to work on the comics, and start a new drawing of more AWESOME Geoff John's created characters, the Indigo Tribe!

Below is the tones and pencils to my Sky Doll Pin-UP. Enjoy! 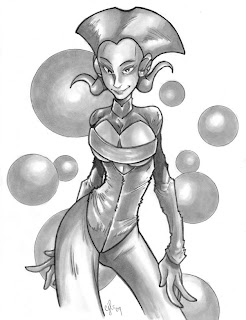 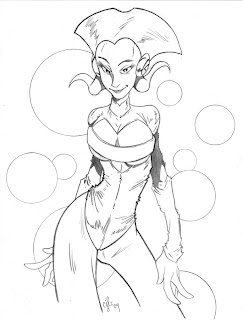 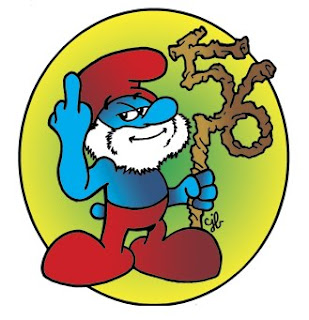 It's football season, and Fantasy Football Season! Wish me luck in my draft this year (August 29th), and on my season! I pick 12th this year, so I got the wrap-around picks! Got my stategy down already...

Learning from the Master!

One thing I have found out about working in this industry we call the Comic Book Industry, is that you make some really good friends. We really have quite the little community established, and for the most part, everyone is really friendly. For the MOST part. There have been so many people I have meet and talked to, either by phone or email, that I have worked with to some capacity, who I now know I can also call a friend.

And what do friends do for each other?, but help each other out. One such friend I have made is a colorist named Brian Miller. Brian Miller is the founder and owner, along with his wife, of HiFi Colour Design since 1998. Since then, he and his company have been producing some of the BEST, high quality color in comics in the industry! I have worked with Brian probably since I started at DC Comics in 2000, and maybe even interning in 1999.

It wasn't until much recently that Brian and I started getting closer through email. I have yet to meet him or his wife in person, but am sure to remedy that very soon. Brian has been nothing but nice to me, supportive of my job at DC throughout the years, putting up with all my emails everyday, and he has also been a HUGE influence in my personal artwork and career. He has given me tremendous encouragement, advice, and support for a while now. Whenever I talk to Brian, he is always so upbeat, so enthusiastic about his work, that I knew I liked working with him for many many years to come. I like to think that if you can still be enthusiastic about working in this comic book industry after two years in the business, then I would like to know you better, because it is not an industry for the weak of heart. It is very demanding, very competitive, and very, very time consuming. I knew Brian was someone who I could look up to in that sense (him being one of the most relied upon colorist in the biz), and work harder and harder everyday to just try and accomplish at least a smidgen of all the things he has already accomplished in the industry!

On that note, Brian had asked me recently, to contribute a weekly column on his NEW website, called Master Digital Color. It is a wonderful site filled with not only comic book news, opinion's, and insight, but other entertainment media as a whole. Brian and his team have put tremendous care and skill into this new site, and it can only grow from here. I was honored and thrilled to be asked to contribute to the site, and I want you all to not only check out the site, but read all the stories there-in. In return, I'm hoping Brian will color my huge Green Lantern Spread for me, which you haven't seen yet, because it is still being inked! I'm hoping it looks something like this snippet of a double page spread, which Brian colored for Final Crisis, Legion of 3 Worlds #5: 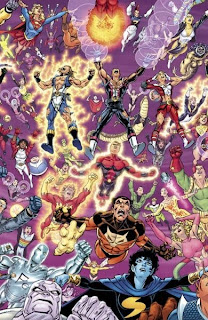 My column is going to be a weekly column about, what else... COMICS! I want to talk about a lot of things, but mainly focus on the aspect I know the most about in the industry, and that is Production/ Pre-Press! I have made a career here, working at DC Comics for the past 9 years, in Pre-Press and I thought it high time to start talking about what it is I do exactly, and how other artists should know how to do what I do.

I hope you follow the column every week, and make comments, and ask questions on the site, and also on my Blog right here! I want to thank Brian Miller again for giving me the chance to get my voice out there, and contribute to his site. I love comic books, I love talking about comic books, and I love talking, period! So if you like my babbling here, why not check out more of what I have to say, here:

PS- Apparently the JLA/ Rittenhouse Card sets are NOT out yet, so I'm STILL holding off on showing you all the work I did on those. I think it was pushed back a bit, so I will find out whats going on with that, and let you know as soon as I know more info about it!

PPS- More art to come soon. I haven't picked up a pencil in over a month because of my Wedding/ Honeymoon, so I'm DYING to get back to the drawing table!
Posted by Unknown at 8:49 AM No comments: 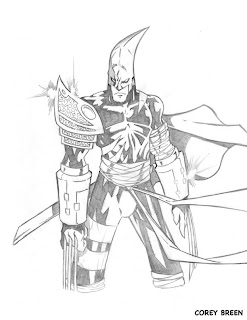 Here is another drawing of my redesign of Wolverine for the Project Rooftop Contest. I didn't enter this one, it was just another drawing I did of the design with a couple of tweaks. I don't know about you, but I really dig this look! Hope you think so too!

CjB
Posted by Unknown at 8:51 AM No comments: 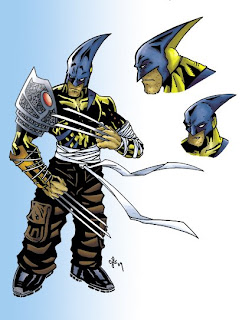 So, yes, I'm BACK from my Wedding, Honeymoon, and Vacation! As great as it was, I definitely missed everyone at work and all my followers here on my Blog and Twitter! I have so much catching up to do, but I wanted to just give a BIG thank you first to all my family, friends, coworkers and everyone who wished Kristy and I all the best! We had an amazing time in Hawaii, and we will never EVER forget it!

But now that I'm back I have so much to get to. I thought I would start things off by FINALLY posting my entry to the Wolverine: Look Sharp Project Rooftop Contest. They announced the winners, and while I did not win anything, I had a BLAST doing this, and can't wait for the next character contest! It's a great thing they do on that site, and I've been following it since the beginning, and finally got a chance to enter. I really like my redesign of Wolverine above, but there was some great entries that won out over it. Congrats to the winners and honorable mentions, and hopefully my image will be shown on he site at some point when they show all the other entries! Please check it out at:

I have so many other things to post, and I'll get to all that very very soon. Until then, check out my process below on the Wolverine Redesign, and be sure to keep tuning into the site as I get back in the groove of hings! I have so much to do, so I'm trying not to pull myself in too many directions at once. Just do one thing at a time, and this is a good place to start.

Hope you enjoy, and thanks again to everyone who wish me and my wife well wishes! 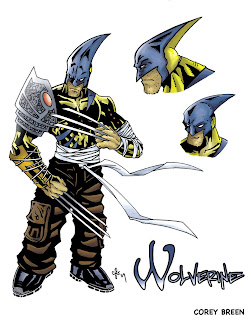 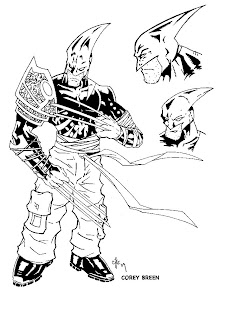 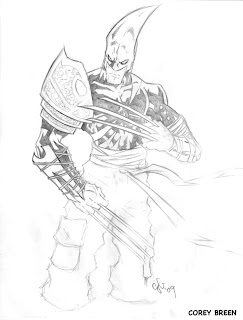 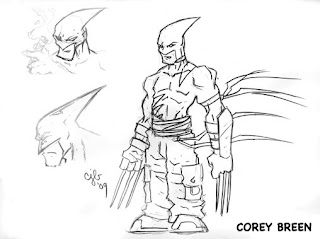