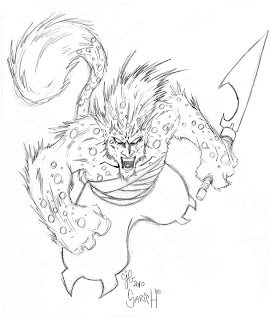 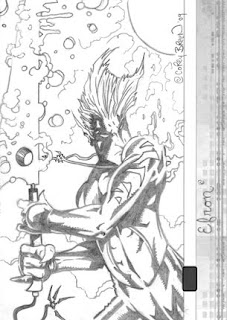 Here are two more drawings, one of SaricH, and one of Efron, both creator owned characters.

I actually started drawing the SaricH one at NYCC, but didn't finish it until now. I drew the Efron drawing last year, but here it is posted for the first time, since I introduced him last post.

Let me know what you think of both characters!

Corey
Posted by Unknown at 10:37 AM No comments:

Last of the Con! 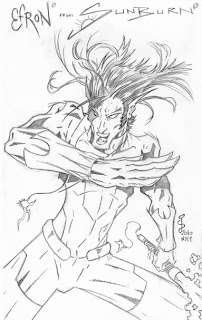 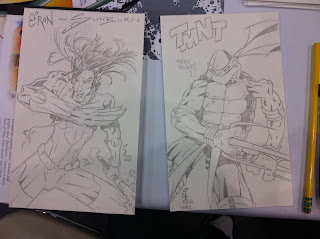 Above is the second exclusive drawing I did at New York Comic Con. The first was the TMNT drawing as posted earlier this week, that you can see side by side with this second one. This one is a creator owned character I came up about 2 years ago, named Efron, from an idea for a book called Sunburn.

I really like this elf-like character I created, and I hope I'm able to do something with him sooner rather then later. Since most of my time will be devoted to bringing the SaricH Graphic Novel to life throughout this year, I won't have too much time to devote to other ideas such as Efron and Sunburn. Maybe I'll make him the focus of next years NYCC, and make him the cover character to next year's Art of Corey Breen book. I like that idea, so we shall see.

Well, I think that about wraps up the NYCC completely on my end. Again, I had such a great time, I meet so many great people and fans and contacts, that I am still floored by the positivity and great responses to my work! I can't wait to do it again next year, and I look forward to this year being my best as far as getting my work out there to the public, and getting a lot of work publish!

CjB
Posted by Unknown at 7:53 AM No comments: 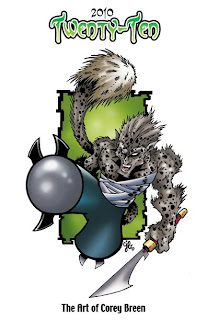 To the right of this very Blog page, you can purchase your copy of the 36 page "sketchbook" that I premiered at New York Comic Con! It is $10.95, with free shipping, and you also get a FREE sketch in the the back! When you purchase the book, please email me at corey@cjbpro.com and let me know what character you would like me to draw as your free sketch!

Thank you so much for your support, and I hope you purchase a book! Email me with any questions, concerns, problems with ordering!

Corey Breen
Posted by Unknown at 8:00 AM No comments: 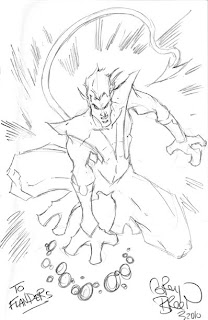 Nightcrawler © Marvel Comics
Pencil Sketch
By Corey Breen
Posted by Unknown at 8:09 AM No comments: 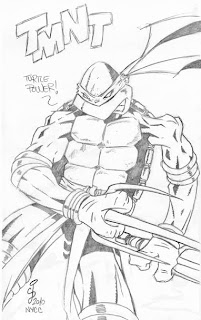 Raphael from TMNT © Eastman & Laird
By Corey Breen
Pencil
The Teenage Mutant Ninja Turtles were by FAR and away the most popular request made for prints and sketches over the entire weekend at the New York Comic Con. Here is an exclusive sketch I did for the show of Raphael! Next year, I gotta remember that NOTHING tops the Turtles in fans minds, and I will be doing a ton more drawings of them throughout the year!

CjB
Posted by Unknown at 8:36 AM No comments: 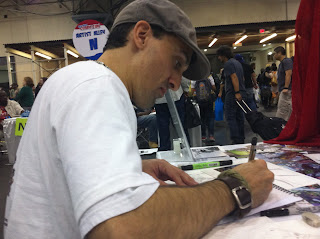 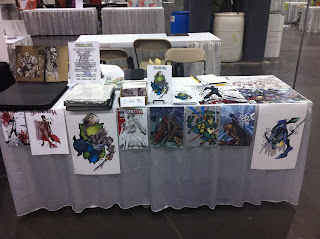 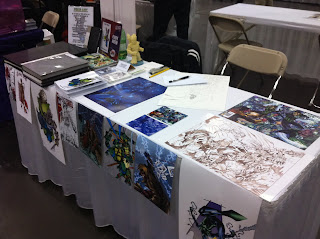 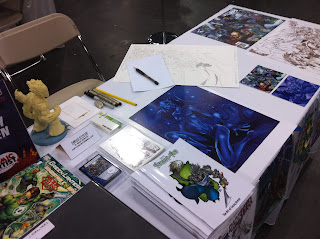 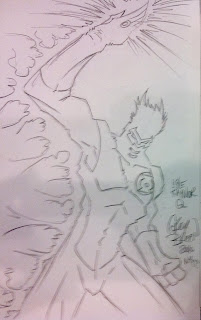 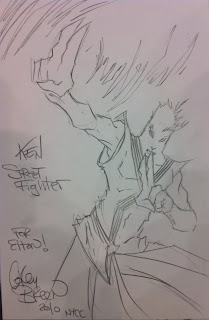 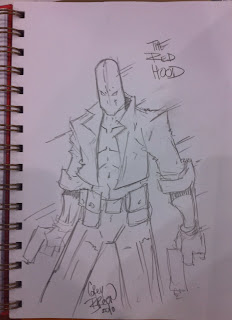 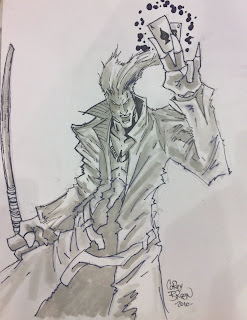 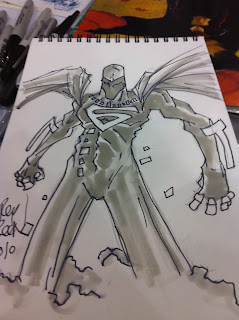 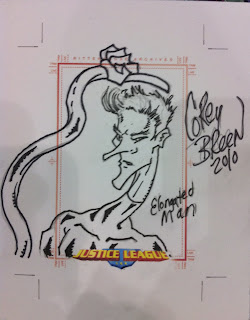 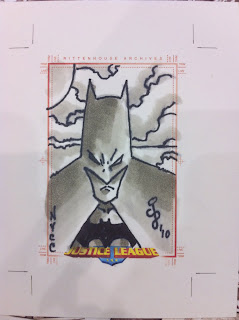 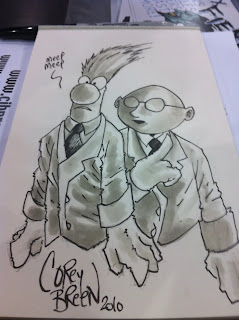 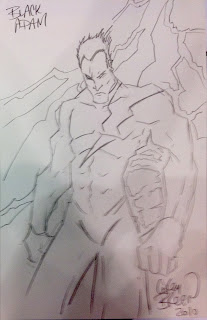 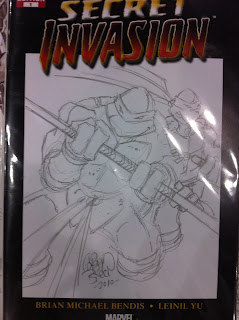 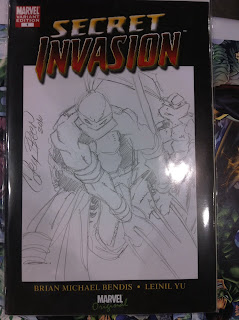 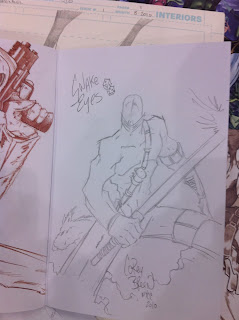 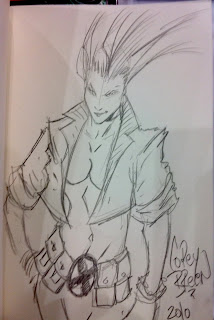 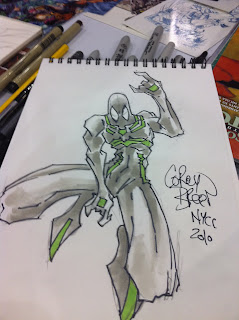 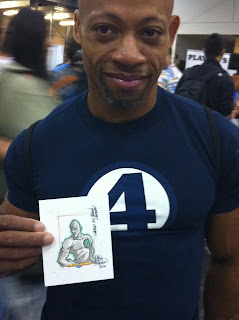 I have to say this was an INCREDIBLE experience! I was floored by the amount of awesome fans and guests at the show, and their support of my work! I sold a ton of prints, note cards, and Art of Books, and did about 30 original drawings for people! Above is only the ones I was able to take a quick pic of. I wanted to get them all documented, but that was near impossible, there was just too many.

Off the top of my head, I know some other sketches I did that I wasn't able to take pictures of were about 4 or 5 more TMNT sketches, Edward from Twilight, Nightcrawler, Rot Lop Fan Green Lantern, Barney Rubble beating up Barney the Dinosaur, Neytiri Sketch Card, and a Spider-Man & Iron Man commission, and many, many more! I wish I took pics of those, but I was just so busy!

I have to give a BIG thank you to everyone who came by to say hello at my table including my boss, Dan Didio! A big thank you to all the industry people who introduced themselves to me, some old coworkers, and some fellow current coworkers! Big thank you to all my other fans who stopped by, and all the news ones I got. Also anyone who purchased anything, and all those that I did a sketch for either in their sketchbooks or my Art of Book, THANK YOU!

Finally, a BIG thank you to my wife who helped me out on Saturday, thank you sweetheart, I love you!

I have two more EXCLUSIVE drawings I did just for the Blog to show you that I did exclusively for the New York Comic Con, and I'll probably post those starting on Monday. One is of a NEW creator owned character of mine that I'm ready to introduce, and one of the MOST POPULAR & requested character of the show, the Teenage Mutant Ninja Turtles! Making a comeback, oh YEAH!

Thanks again everyone, can't WAIT for next year!

New York Comic Con Part I
So it begins! The countdown to NYCC! Can't tell you how EXCITED I am! I got so much stuff to show, and sell, I hope I can fit it all in a suitcase to bring to the show. I will be drawing sketches to all those who buy an Art of book, and if I sell out of those, I will continue to do sketches through out the con. In fact, just below, you can see the flier I have made that gives a run down of all the services I will be providing at the show. 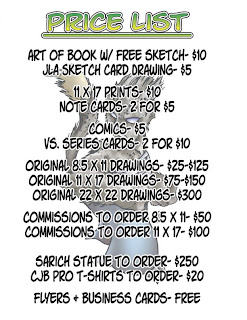 The main part of my show will be focused around my Art of Corey Breen Book. I will be selling my Art of Book for $10, and if you buy that you will receive a FREE sketch of any character you want (reference may be necessary) in the back of the book on one of the blank pages. The Art of Book is 32 pages in full color, even though most pages are gray-scale versions of some of my more popular colored pieces. I want to give a sense of a sketchbook, even though these are all "finished" pieces on their own.

Next up, I will be selling FULL COLOR 11 x 17 inch Prints of my more popular pieces. These will include the SaricH Art of Corey Breen Cover, my pieces of Grendel, Neytiri, Green Lantern Corps, and Darksiders, among others pieces. Those will be $10 each as well, and I will sign them and/or personalize them.

Next I will have 4 x 5 inch note cards that were a big hit from last year. There are a lot of these of MANY different pieces, so choose your favorite TWO for $5. They are glossy, card stock note cards, and they look REALLY great, I love them. Put them on your fridge! LOL

Comics I have worked on or in can be bought for $5. Also, the two VS. Series trading cards I did for Upper Deck/DC are available, and you can by both of them for $10. LIMITED SUPPLY on the comics & cards though!

Next I will be selling a MAJORITY of my ORIGINAL ART! All the pieces you have seen n my website and Blog WILL be for sale! Most of the pieces are 8.5 x 11 loose leaf drawings. Those will range from $25-$50. Other pieces are random sizes and range in price. I will be selling full 11 x 17 drawings, but they are more expensive, in the $75-$150 range. Double page spread drawings are the most expensive at $300, i.e. the Green Lantern Corps Spread and the Darksiders piece.

I will also have order forms on me to fill out if you want more then just a 5-10 minute sketch in the back of the art of book. I will be taking orders for full on commissions at the show that will be completed starting after the show in the order that they were taken. The Prices are $50 for 8.5 x 11 pieces, and 11 x 17 pieces cost $100. MAX 2 characters per piece. The shipping and handling will be FREE to all those you order.

I will also have the SaricH Statue on DISPLAY for all to see the amazing job Amos Hemsely did with it! Very proud of this, so be careful, and DON'T TOUCH! LOL Amos still has the mold of the piece, so if you do have the money and want a statue of my main dude, SaricH, then I can order one for you. The cost is $250. That I may need shipping help on though, lol. Kristy and I will also be wearing EXCLUSIVE CjB Productions T-Shirts (men's & woman's), so if you would like to order one of those, I can make that happen too, for $15! The T-Shirt's are very cool, actually.

Finally I have some fliers to give out, and business cards of course. BUT, depending on how the show goes, I look forward to offering some really COOL deals, and possibly some really GREAT free swag!

Like I mentioned above, ,my beautiful wife, Kristy will be there on Saturday taking orders and giving out a lot of info as I keep busy with the sketching. Say hello to her, treat her nice, and let's do this!

I can't wait to meet all my fans, and get a TON of new ones! VERY EXCITED ABOUT THE SHOW! Hope to see you all there! 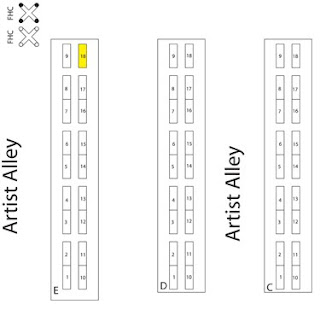 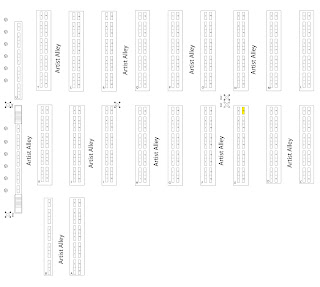 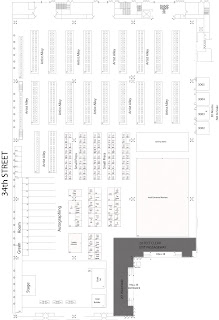 The seating arrangements for New York Comic Con have been released, and I am sitting at Table E-18! I will be there the entire show.

All this week I will be posting all the incredible things I will have at the show to see, look at, buy, and talk about! I can't wait for the Con as I hope to meet, see, and draw for a lot of my fans! I think it's going to be a wonderful show and hopefully I will get a lot more fans into my work!

Hope you all are as excited as I am!

Corey Breen
Posted by Unknown at 9:38 AM No comments: